Posted on February 3, 2013 by ohioastrology

The most crucial question to ask Chuck Hagel as he interviews for Secretary of Defense (SOD), in my mind, is whether or not he’s ever been seen in a room with Chase CEO Jamie Dimon (pictures from Wikipedia). 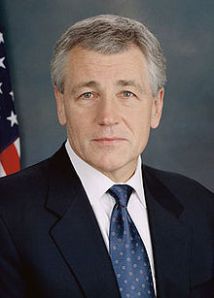 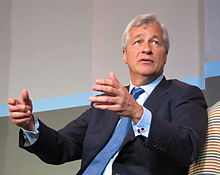 This is when I’d really, really love to have time of birth on each man to know the rising sign and speculate on why the two men appear to be twins separated at birth.

But they aren’t twins, for sure, as Hagel was born ten years before Dimon (Mr. Dimon, you need to take care of yourself).

Hagel is also way unlike Dimon in that he has very little emotion (Dimon is a combination of emotional Pisces and neurotic Aries). Hagel’s perfect, really, for the SOD with sun in Libra and moon in Capricorn.

I was just telling someone last weekend how Capricorn moon makes for an excellent military commander. Someone with a Cancer moon, for example, might have difficulty explaining to a group of young men why they should risk their lives in a jungle in a faraway place for the sake of some political ideal which will pass like cigarette smoke in a hot, summer night.

To do that sort of thing, guide people into suicide and homicide through sense of mission, takes a very firm belief in authority. One must also be viewed as authority.

By the way, how does one become authority?

Authority is the by-product of government, religion, corporation and university. Anywhere you find hierarchy you find rules and authority. Unlike parallel lines that appear converge in the distance, going back far enough in history will unite these various hierarchies into a common point.

OHA endorses Libra sun, Capricorn moon Hegel for SOD. Libra is about justice and fairness (if not totally consumed with partnership) and Capricorn is about structure and authority.

What more could you want in a SOD?

Moreover, the nice tight square of Jupiter/Mars (in Scorpio) with Pluto/Saturn (in Leo) makes him almost vicious. Scorpio is a detective and can sniff out your motives before you even think them.

Isn’t this important for someone defending a nation?

Neptune conjunct Hagel’s sun will not make him nicer, I believe, but simply make him believe he’s nice. Like the deluded narrator in a novel, Hagel might talk about the lovely party he held with imported caviar on fine, ancient British china.

The party goers, you learn in the next chapter, stopped at the bar on the way home complaining that all they got were some little fish eggs and worried eyes that they might break the precious plates. They will also tell some Hagel backstory, over beer, about his petty meanness. They will describe how they were served cheap wine while Hagel slipped himself some expensive vintage from the cellar.

What does “nice” help in a SOD anyway? Nice can be a weakness, right?

Libra does want to be liked but the Capricorn moon is interested in respect. Hagel probably prefers respect to popularity.

Libra does have its charm so Hagel can be very charismatic, especially with Neptune hanging about the sun in that sign. While some may hate and revile this man (the Scorpio stuff), he will also have those that love him and follow him through the jungle on a mission to kill those nasty enemies.

That’s important in a SOD, isn’t it?

I'm just another soul trying to make sense of the world. As I've grown, so has my understanding of astrology. I'd like to communicate that astrology is not occult and not fortune-telling but that it is a fluid, creative description of the life we choose to live.
View all posts by ohioastrology →
This entry was posted in Politicians - Not Ohio and tagged chuck hagel astrology, Ohio astrology, secretary of defense astrology, SOD astrology. Bookmark the permalink.