History Continues Itself – The Opium Wars

“History repeats itself,” the saying goes. Or you might prefer Edmund Burke’s “Those who don’t know history are destined to repeat it.”

At first glance both sayings appear correct, but it might be more accurate to say, “History continues itself.” Rather than historical events starting, stopping then repeating themselves, so much of our current historical landscape can be traced back with unbroken line to past events. As with an individual life, the current political environment of the earth is a result of past decisions and actions.

For example, today refugees from the Middle East are flooding into Europe. If you trace the modern Middle East to its roots at the end of World War I, you can see Europe (mostly France and Britain) was the power that defined the territories and carved the lines in the sand. If you travel even further back in history to the First Crusade of 1095, you will find yourself in France, which is now a focus of terrorist attacks.

In the Western Hemisphere, we can look to the 1980s when US President Ronald Reagan supported conflicts in Latin American countries, including El Salvador. From the wreckage of El Salvador arose a street gang, MS-13, that is now the terror of other gangs and major cities in the US.

These events to me are political karma – the energy used to disrupt other nations returns to haunt the perpetrator.

In one fascinating and unveiled return of energy, the rise in the US of opiate addiction has a direct astrological line to the 19th century Opium Wars in southern China.

Up to the the early 19th century, Britain purchased tea and porcelain from China. As buyers only, in today’s lingo, there was a huge trade imbalance. In response, Britain traded opium, which was illegal in Britain, for Chinese silver. Trade imbalance was cured for Britain but at the expense of China which faced a rise of opium addiction and a loss of silver. In response, China banned, confiscated and destroyed large quantities of opium.

That began the first Opium War (1839-1842) in which Britain sought restitution for destroyed opium. Britain won that war, trade rights in China and a lease to Hong Kong until 1997.

In the second Opium War (1856-1860) France and other countries joined the war to force China to concede ports and treaty rights. Foreign powers ruled and dominated in China until 1949 when the Communists took sovereignty.

When analyzing world events from an astrological standpoint, we need to look at the transpersonal planets of Uranus, Neptune and Pluto. Their distance from the earth and long cycles represent those slow changes that are noticed only when the energy has finally shifted. World history takes longer than personal history to form.

When analyzing religion, mysticism, drugs or any escapist, mass event, we need to track down the astrological Neptune. According to Café Astrology:

Neptune, God of the Sea, is the ruler of Pisces. In astrology, Neptune is considered a planet of inspiration, dreams, psychic receptivity, illusion, and confusion. Neptune rules spirituality, and all things subtle. A youthful, and sometimes naive, spirit characterizes those with a strong placement of Neptune in their natal charts.

On the up side, Neptune is associated with intuition and spiritual enlightenment. As well, it is a planet of mercy and compassion. The more negative manifestations of Neptune include deception, trickery, deceit, guilt, and addiction.

In 1839, Neptune was in the early degrees of Aquarius. At the end of the second Opium War, it was in the late degrees of Pisces. Neptune rules Pisces and that, my dear readers, is where Neptune is today, 157 years later. Neptune’s cycle is a 165 years so it’s close to a complete Opium War cycle.

Opioids, I learned, cover both synthetic and non-synthetic forms of opiates which derive from the opium plant and are used to relieve pain. Opioids are increasingly prevalent as prescribed pain killers in the US with the unfortunate effect of causing an epidemic of addiction to both opioids and heroin.

According to the presentation America’s Addiction to Opioids: Heroin and Prescription Drug Abuse, opioids do the following:

Opioids include drugs such as OxyContin and Vicodin that are mostly prescribed for the treatment of moderate to severe pain. They act by attaching to specific proteins called opioid receptors, which are found on nerve cells in the brain, spinal cord, gastrointestinal tract, and other organs in the body. When these drugs attach to their receptors, they reduce the perception of pain and can produce a sense of well-being; however, they can also produce drowsiness, mental confusion, nausea, and constipation.

And why has addiction to opioids increased in the US?

Several factors are likely to have contributed to the severity of the current prescription drug abuse problem. They include drastic increases in the number of prescriptions written and dispensed, greater social acceptability for using medications for different purposes, and aggressive marketing by pharmaceutical companies. These factors together have helped create the broad “environmental availability” of prescription medications in general and opioid analgesics in particular. 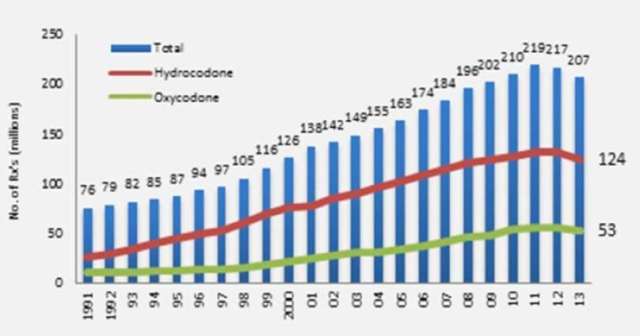 Like the British in 1839, the pharmaceutical companies are winning an opiate war. Today they are more cleverly using the very legal health care system. The peak year of opioid prescriptions was 2011 – that is the year Neptune moved from Aquarius into Pisces.

As in 1839, the government began to intervene in the opioid addiction crisis. Today’s intervention is about education and awareness. My own personal experience is that opioids are prescribed without discrimination of pain. I’ve had them prescribed for minor dental work to major surgery. As my dentist explained it when I asked why such a strong pain killer was provided for minor dental work, she replied that you don’t know how someone else experiences pain.

Pisces, as a sign, experiences everyone’s pain. Possibly the over-prescription of opioids is due to a fear of pain, no matter how minor.

Neptune in Pisces does seek the “well being” that is provided by substances like opioids. Neptune, which rules the ocean, is also fond of drinking. Ultimately Neptune seeks spiritual escape from a world that lacks poetry and wonder. Neptune-in-Pisces escape is evident in other trends occurring now from “binge” media watching to the rise of “craft” alcohol.

The Opium Wars of the 19th century and the current opioid crisis have the same roots – business. History isn’t repeating itself, history continues itself. History, like Neptune, has no boundaries.

High on Neptune in Pisces

Neptune in Pisces: Escape and Enablement

Mutable signs dissolving in a glass of Neptune

I'm just another soul trying to make sense of the world. As I've grown, so has my understanding of astrology. I'd like to communicate that astrology is not occult and not fortune-telling but that it is a fluid, creative description of the life we choose to live.
View all posts by ohioastrology →
This entry was posted in Planets and signs and tagged neptune in pisces, Ohio astrology, opioid astrology, opium war astrology. Bookmark the permalink.

2 Responses to History Continues Itself – The Opium Wars