If you want to host a news show, what sign should you be?

Posted on January 5, 2012 by ohioastrology

When I heard that grumpy and cantankerous Capricorn Charlie Rose would host CBS’ morning news show, I wondered why so many Capricorns make it in this realm (and why one would want to wake to Charlie Rose – I thought he was the one to put us to sleep).

Why aren’t news shows filled with Geminis and Sagittarians, the two signs that love to talk about news and ideas and generally just love to talk? 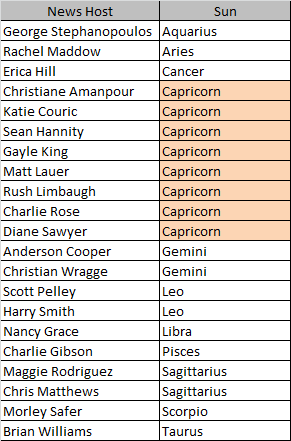 In a blog about talk show hosts, I noticed that Aquarians prevail in daytime talk shows.

Why Aquarius for a talk show and Capricorn for a news show?

Dictionary.com definition of authority is “the power to determine, adjudicate, or otherwise settle issues or disputes; jurisdiction; the right to control, command, or determine.”

The “right to control.” Interesting. Who bestows this right?

Parenthood is the only natural authority-bestowing situation in our lives. The rest is kind of made up.

Capricorns are serious folks. They may also appear on news shows more than other signs because of a serious and mature nature.

Capricorns probably also appear in the corporate news shows because they know how to “toe the line.” As purveyors of authority, they do not always challenge authority. If Bush calls the invasion of Iraq “the war on terror,” then our Capricorn hosts call it “the war on terror.”

While there are too many news show hosts to study on this sunny morning, I did notice in the chart above that the Capricorns are older and the newer news show hosts are from non-Capricorn signs.

As Pluto transits Capricorn, our Capricorn anchors may pass into the annals of history as they focus instead on the disintegrating structures of their lives.

I can’t image waking to Charlie Rose. He’s not my “cup of coffee” but he may be yours. I’m guessing that this time next year will see a new host in his chair.